Figma variants is the new feature released, well, by Figma! This feature gives you the ability to group similar components and create a universal UI to control them. It is not a new feature per se but it does make navigating and using rich Figma libraries far more convenient.

There is already an article Preparing for variants from Figma. But I found it quite hard to read. It reads like a specification rather than a tutorial. There is also an interactive Figma file, that is far better! Definitely give it a try. There is also Best Practices from Figma.

While variants are really powerful, they take a while to understand and setup. That is why I wanted to write down something that I can refer to later in discussions. So, let's dive in!

Fist, you need to select your desired components and turn on the variants option. Once you've done that your components get encapsulated in a wrapper and they themselves become variants.

At this point all the selected components will disappear from the Assets page and they will be replaced with a single component.

If you are curious how to change the component preview in the assets tab. Top left variant gets the spot! @figmadesign pic.twitter.com/yFWMErzJ0m

The difference here is that these components have special UI on the right, where you can toggle all the different properties that change the component behaviour. Although in reality you are just switching between different component variants 🤯

In order for this to work you need to setup all the variants correctly. And you do this by setting different properties on them.

Using naming like components and variants over and over is getting tough to write, and even tougher to read! But bear with me 🙏

You can set the properties in two different ways.

There are two types of properties you can set:

You can name these properties however you want, it can be anything but an empty string, even emoji works. But two properties cannot share the same name, they need to be unique, otherwise they will just merge when you rename them.

In the end, every unique set of property values equals to one variant. This is both good and bad.

I suggest you do at least some planning before you jump in into the variants design. If you would like to see a bit extreme example checkout the tweet thread below.

This is called combinatorial explosion, where the amount of required states doubles with each new parallel property. UI components often have lots of these. Here's what it looks like for Ant Design System's button component. pic.twitter.com/yk7UREFGL9

Does something change for developers?

Not really. Since variants are just improved components, nothing is changing for you. They will exist on the same place. If you had access to them previously you will have access to them now as well.

Can you see what properties are selected? Yep! If you select a variant of a component you can see its properties in the sidebar. 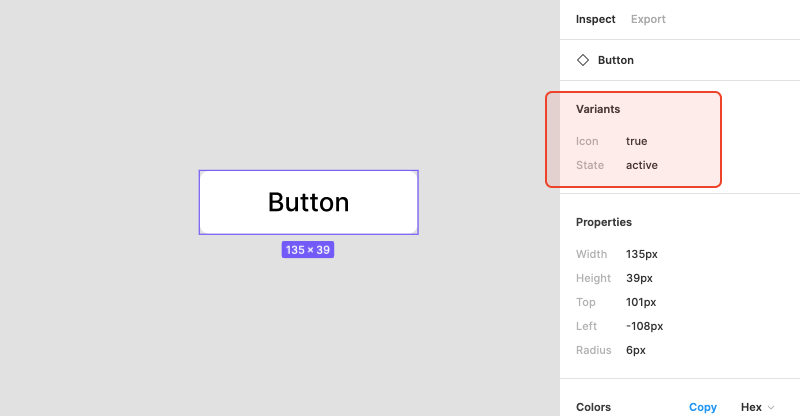 And that's all folks for the intro!